Celebrate the Release of UNDERCOVER ATTRACTION!
A last chance for justice!

New York Times and USA Today bestselling author Katee Robert delivers the next book in her sizzling O'Malleys family series, hailed as "The Godfather meets Romeo & Juliet." In UNDERCOVER ATTRACTION Aiden O'Malley, one of the most dangerous men in Boston, offers ex-cop Charlotte Finch her last chance for justice. 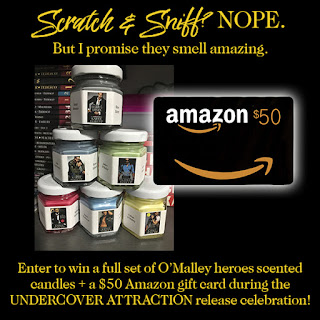 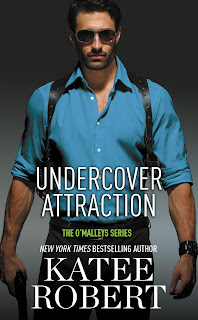 Scandal. Wealth. Power. Seduction. Welcome to the world of the O'Malleys.

Ex-cop Charlotte Finch used to think there was a clear line between right and wrong. Then her fellow officers betrayed her, and the world is no longer so black and white. Especially when it's Aiden O'Malley, one of the most dangerous men in Boston, who offers her a chance for justice. The only catch: she'll have to pretend to be his fiancée for his plan to work.

Aiden can't afford to let anyone see the man behind the mask. To run the O'Malley empire, he has to be cool and controlled at all times. But the moment he meets Charlie, they're playing with fire. Her slightest touch is enough to send him over the edge. At first their "engagement" was a way to eliminate his enemies. Now he'll do whatever it takes to keep her safe-- even if he has to destroy his own family to do it.

So I have to preface this review by saying I am huge Katee Robert fan.  That being said it is my totally unbiased opinion that this is the best book in the O'Malley series so far. ;)
Aiden and Charlie are perfect together. The story is an amazing balance of sexy mixed with a good dose of my dick is bigger than yours.
Undercover Attraction also does an excellent job of checking in with the couples that have come before without it feeling forced.

I highly recommend this book 5 out of 5

Enter to win a $50 Amazon Gift Card or an O'Malley heroes candle set from Katee Robert!

Undercover Attraction Excerpt
Copyright © 2017 Katee Robert
His brows slanted down, and then his expression cleared. “You’re worried about me? Bright eyes, you don’t have to be.”
Either he was lying to make her feel better or he’d missed the cold calculation in Alethea’s eyes when she’d watched them walk out. If he didn’t dance to the tune she set, she would have no problem killing him. She wouldn’t lose a wink of sleep at night over it.
Charlie gripped his hand tighter. “Promise me.”
“You know I can’t. I’ll do whatever it takes to see this through, and if that means getting into another situation like the one we just left, I won’t hesitate.”
She wanted to shake the stubbornness right out of him. “Even if it means you don’t walk out alive?”
He started to give her a pat answer. She saw the second he registered that she was actually scared for him—not herself. The mask slipped, and something like wonder dawned. Aiden pulled her into his lap and framed her face with his hands. “The end justifies the means. You know that.”
She’d thought the same thing earlier. Now she wasn’t so sure.
But he wasn’t going to listen to her tonight. Either he hadn’t seen the danger or he was determined to downplay it. If she kept pressing, it might mean a fight, and that was the last thing Charlie wanted. She’d never been more aware of time flowing, a river that she couldn’t fight. Aiden wasn’t hers. She couldn’t protect him. She didn’t even have a real right to demand he take more precautions. She was just a woman whose aims had lined up with his.
“Charlie—”
She kissed him. There wasn’t anything left to say that they couldn’t communicate with their bodies. She shifted to straddle him, the move making her dress ride up to indecent heights. All Aiden’s careful control was gone in an instant, replaced by a frenzy that matched her own. He slid his hands up her thighs to her hips, pushing the dress even higher, and grabbed her ass, grinding her against him.
All her fear and anger turned to desire, creating an inferno bound to incinerate them both. She could care less. Charlie reached between them and undid his slacks to pull out his cock. She palmed him. “Condom?”
He opened his mouth and then considered. “Fuck, I don’t have any.”
Damn. Disappointment soured in her stomach, but she shoved it away. “Then I guess we’ll have to get creative. I need you inside me. I don’t care how.” She pushed away his hands and slid down the seat to kneel between his thighs.
Or she tried to.
He caught her halfway through the move and shook his head. “No, bright eyes.”
“What?” Surely he wasn’t rejecting a blow job? That had to break some kind of international law. It just wasn’t done. “You’re starting to give me a complex.”
Aiden lifted her back to his lap, this time facing away from him. The passing lights showed her reflection in the glass separating them from the front seat. Her blue eyes were wild, her hair tangled from his fingers, her dress in danger of slipping off her breasts. Behind her, Aiden was barely a shadow. He moved her hair to one side and kissed her neck. “You come first, bright eyes. Second, too, if I have any say in it.”
She licked her lips. “One of these days, I’m going to tie you down and give you all the blow jobs I’ve been craving.”
“One of these days…” He bracketed her throat with one hand, keeping her head tilted to the side, and coasted the other hand up her inner thigh, spreading her legs further. “One of these days, I’ll let you.”
She nodded. “Good answer.” The move increased the pressure of his hand against her neck, and she squirmed, turned on far more than she should be.
His wandering hand reached the junction between her thighs, and he parted her, idly stroking. “I think I like that you’re worried about me.” His finger circled her clit and away. “I like it a lot.”
“Mmm.” What was she supposed to say to that? She’d already had to face the fact that she didn’t have the right words because she didn’t have the right.
His finger pushed into her slowly. “I won’t be without a condom again, bright eyes. Feeling you so hot and wet around my finger makes me crave the same around my cock.” He pumped as idly as he’d touched her to begin with. “A woman like you could make a man forget himself.”
It was hard to think, with his hard body behind her, his erection pressing against her ass, and his hand moving between her legs. She tried despite that. “Only for a while.”
“No, bright eyes. Not just for a while.” He dragged his mouth down the line of her shoulder. “When I’m inside you, all I can think of is you. When I’m near you, all I can think of is getting inside you again. If you gave me half a chance, I’d be buried to the hilt right now, condom be damned. That’s crazy.”
She rocked against his hand, letting her head fall back to rest on his shoulder. He let go of her throat. The only warning she got was his thumb brushing her sternum and then he pushed down her dress, baring her breasts completely. Aiden cursed. “Next time you forget such a vital part of your wardrobe, the moment I find out, I’m going to fuck you. I might give you the option of dragging you to the nearest bathroom…if you’re lucky.”