Celebrate the Release of THE BASTARD’S BARGAIN!

New York Times and USA Today bestselling author Katee Robert delivers the final installment in her sizzling O'Malleys family series, hailed as "The Godfather meets Romeo & Juliet." In THE BASTARD’S BARGAIN Dmitri Romanov must use his legendary focus and control to stay one step ahead of everyone else in the ever-shifting power plays of New York City. 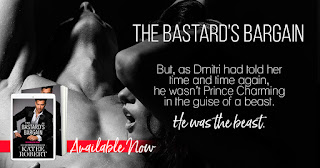 What readers are saying:

“The Bastard's Bargain presents a seductive escape and a fulfilling fantasy for that bad boy craving a girl can never outgrow.”—Isha at Book Likes

“Keira and Dmitri are everything. What develops between them is raw and carnal and wanton. The way they need each other and the way they connect is beyond sexy. It’s something deep and dark and heartbreakingly beautiful.”—Eva, Goodreads Reviewer

Add THE BASTARD’S BARGAIN to your TBR pile on Goodreads! Then keep reading to get a sneak peek excerpt and to enter the giveaway for a $50 Amazon gift card and Dmitri Romanov scented candle! 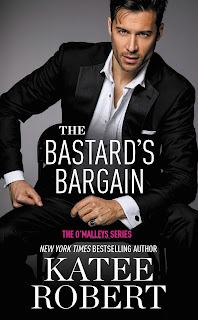 Married to the enemy

When Keira O'Malley was a child, she used to picture her perfect wedding. The flowers. The dress. Her husband. But nothing could have prepared her for saying "I do" to Dmitri Romanov-cold, domineering, and always one step ahead of everyone else in the ever-shifting power plays of New York City. She agreed to his bargain to secure peace for her family, and she may want the bastard more than she'd ever admit, but she'll be damned if she'll make this marriage easy for him.

Dmitri knows better than to underestimate Keira for one second. Molten desire smolders between them, a dangerous addiction neither can resist. But his enemies are already on the move, and he needs every ounce of his legendary focus and control to keep them alive. Keira could just be his secret weapon-if she doesn't bring him to his knees first.

Enter to win a grand prize of a $50 Amazon gift card and Dmitri Romanov scented candle!

Review:
Oh man I don't know whether to cry or jump for joy.The Bastard's Bargain is amazing. Excellent work Ms Robert. I can't believe there's not going to be any more O'Malley books. I've never wanted a book to get to the end of a book so quickly yet simultaneously for it to never end. I loved Dimitri and Kiera. They were like mixing water and oil they don't really mix but they make the most beautiful pictures. Also as always Ms Robert gave us just enough info about the family so that we knew what was going on wiht all the other couples we love so much.

Definitely a 5 out of 5 #MrsRomanovforever