BOOK 1, FIGHTING FOR EVERYTHING, is available right now!

Add to your Goodreads

The Warrior Fight Club has one rule: You must be a veteran...

Loving her is the biggest fight of his life…

Home from the Marines, Noah Cortez has a secret he doesn’t want his oldest friend, Kristina Moore, to know. It kills him to push her away, especially when he’s noticing just how sexy and confident she’s become in his absence. But, angry and full of fight, he’s not the same man anymore either. Which is why Warrior Fight Club sounds so good.

Kristina loves teaching, but she wants more out of life. She wants Noah—the boy she’s crushed on and waited for. Except Noah is all man now—in ways both oh so good and troubling, too. Still, she wants who he’s become—every war-hardened inch. And when they finally stop fighting their attraction, it’s everything Kristina never dared hope for.

But Noah is secretly spiraling, and when he lashes out, it threatens what he and Kristina have found. The brotherhood of the fight club helps him confront his demons, but only Noah can convince the woman he loves that he’s finally ready to fight for everything. 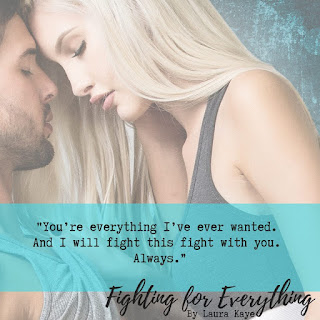 Review:
Oh man I'll be the first to admit I am a fan of Laura Kaye's books. That being said she never fails to surprise me with every new book. If book one is anything to go by this series is going to be amazing and dare I say maybe even better than Hard Ink and Raven Riders.

Book one introduces us to all of the members of the Warrior Fight Club but specifically tells the story of Noah Cortez and his life long best friend Kristina Moore. this is a fabulous friends to lovers story and Noah fights it all the way but Kristina is strong enough to realise that Noah is the man for and she will find away to be with him not matter how broken he thinks he is.

The sexy times in this book are blow your mind hot but they are the perfect counter point to the fun friendly times and the hard struggles as Noah fights to find his footing. There are some excellent side characters and I can't wait to see each and every one to get the HEA.

Overall I give this book 5 out of 5 I'd give it ten if I could. If you read one book in the next few months this should be the one.

This fight club has one rule: you must be a veteran…

Resisting her only makes him want her more...

Private investigator Billy Parrish is good at three things—fighting, investigating, and sex. MMA training with the other vets in the Warrior Fight Club keeps his war-borne demons at bay—mostly, and one night stands ensure no one gets too close. But then his best friend from the Army Rangers calls in a favor.

Shayna Curtis is new to town, fresh out of grad school, and full of hope for the future. With a new job starting in a month, she’s grateful when her brother arranges a place for her to stay while she apartment hunts. But she never expected her roommate to be so brooding. Or so sexy.

Billy can’t wait for Shay to leave—because the longer she’s there, the more he wants her in his bed. To stay. He can’t have her—that much he knows. But when fight club stops taking off the edge, Billy lets down his guard…and starts fighting for what’s his.

Add to your Goodreads

Posted by Melissa Kendall at 13:37