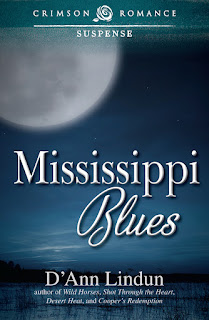 Blurb:
Five years ago Trey Bouche found his best friend - with blood on his hands - standing over a body. Although Trey wanted to believe in his friend’s innocence, he was forced to testify in court, and Jace was sent to prison for life. Trey returns determined to prove he was right. Even if it means losing the woman he still loves.
Summer Hill cannot forgive Trey, or his father, the chief of police, for the wrongs she feels they did to her family. When her brother escapes from Angola, Summer vows to keep her brother safe, no matter the cost. Falling back in love with Trey again isn’t an option.
Now, five years later, the past begins to unravel. Reluctantly thrown together, Summer and Trey follow a twisted path that lead them to the truth - Jace didn’t kill anyone and an entire town’s ugly secret is unveiled. But more importantly, can Trey and Summer rediscover the love they lost?

Excerpt:
Something tangible sizzled in the air, an undercurrent of high tension.
Jace Hill shot a glance around. All the other cons seemed normal, so he pinched his lips together. The last thing he needed was to draw any attention to himself. Angola guards were quick to use their clubs first and slow to ask questions later. Most were overly eager to put anyone in the hole who looked at them the wrong way.
Jace figured out a long time ago it was safest to keep his head down and his mouth shut. After five years behind the prison’s unforgiving walls, he’d learned the art of living an invisible life. Like a ghost, he moved about praying no one saw him. Keeping low was how he’d survived so far and how he planned to keep on surviving. To the guards, the cons, anyone on the inside, he had no name, no identity beyond the number stenciled across the back of his orange jumpsuit–20010.
Someone yelled, and the driver tromped on the gas shooting the bus forward. Whether from its unusual speed, or the deep ruts, the vehicle whipped from side to side. One tire dropped into the shallow ditch lining the road, tipping the bus still rolling on two wheels. Shackled to a steel pole, Jace’s arms screamed a protest when the movement jerked him sideways. His limbs stretched so hard he feared them being pulled out of their sockets. The floor seemed as if it were going to fall from under his feet. Shouts and curses filled the air.
For a moment, it felt as if the bus would right itself. But instead, it flipped, sliding down an incline. The chains anchoring Jace to the pole broke in half, and he flew like a basketball. Someone’s fist or foot hit him in the face, his ribs slammed into solid metal. He grabbed for something solid, but caught only air. The squeals of tearing tin sounded like a dying animal. Or maybe he only heard his own cries mingling with the others.
His head crashed into the ceiling and the world went black.
*
Gradually the world came back into focus. Jace’s left cheek rested against cool Louisiana dirt, and he tasted blood, dirt, and gasoline. When he gingerly touched the back of his skull, his fingers came away clean. By some miracle, he didn’t have a bashed-in brain. His head hurt worse than the time a guard hit him with a shovel for mouthing off about the shitty food.
One at a time, he tested his fingers, arms, and legs.
All worked, though he hurt like hell.
He pushed up to a sitting position. His wrists and ankles still wore iron bands, but the force of the wreck had broken the chains. He turned his aching head and saw the other men laying in bloody tangles of flesh and clothing. Snake Wilson lay a few feet away, his sightless eyes staring at the blue sky. Lucky bastard. Jace wished they could trade places.
The driver hung half in and half out of the shattered front window. Easing his pounding head the other way, Jace looked for the two guards. One lay sprawled in a twisted heap a few feet away, but there was no sign of the other man. Maybe he’d been squashed under the bus. Jace couldn’t muster up any sympathy for him.
Completing his perusal of the area, Jace saw something that made his pulse jump. The wreck sheared the razor sharp fence surrounding the perimeter of Angola.
A chance to escape.

Already the alarms began to scream a shrill warning, and the hounds bayed with blood lust. If the dogs picked up his scent, there’d be no second chances. If they caught him running, though, there’d be no telling how he would end up. Hanging from a tree, maybe.
He almost jumped out of his skin when somebody grabbed his arm. Handy Graves, an enormous black man, said, “Come on. Let’s get the hell out of here.”
With a groan, Jace pushed to his feet and staggered toward the woods. With a jolt of adrenaline, he thrust himself over the barbed wire and into his unexpected shot at freedom.
After an hour of steady jogging, they found a cove of magnolia trees and collapsed in the middle of them. Covered in sweat, out of breath, too tired to move, they weighed their options. “We need to split up,” Jace gasped. “Our odds are better that way.”
Handy nodded. “Where you gonna go, man?”
He had no idea. For the last five years, he’d dreamed of walking into Mama’s kitchen and sitting down to a meal of ham and cornbread. But he couldn’t now. Not like this. “I don’t know. I guess I’ll figure it out later.” He spit out a mouthful of dirt and blood. “We gotta move. The guards’ll be on us like flies on honey.” In the far distance he heard the baying hounds.
Handy held out his hand. “Good luck.”
“You, too.” They shook and left in opposite directions.
Like a homing pigeon, Jace turned toward Mississippi.

Review:
As with all D'Ann Lindun's books I do a little happy dance when I hear that she has a new book coming out. And when I was offered  a chance to read an ARC in return for an honest review I jumped at the chance.

For those of you familiar with D'Ann's works this book is going to be a little something different. Firstly there is not a cowboy in sight. That of course doesn't detract from the wonderful story. In fact instead of one cowboy we get two home town boys fighting to find the truth and maybe a little love along the way. I honestly had a hard time picking a fave male lead between Jace and Trey.

This book had me guessing all the way until the end for about three quarters of the book I was sure I knew 'who done it' but then a new element was introduced at the end that had me going in a completely different direction. It was definitely hard to put down and I may have read a little during business hours (but don't tell my boss).

Bio:
Falling in love with romance novels the summer before sixth grade, D’Ann Lindun never thought about writing one until many years later when she took a how-to class at her local college. She was hooked! She began writing and never looked back. Romance appeals to her because there's just something so satisfying about writing a book guaranteed to have a happy ending. D’Ann’s particular favorites usually feature cowboys and the women who love them. This is probably because she draws inspiration from the area where she lives, Western Colorado, her husband of twenty-nine years and their daughter. Composites of their small farm, herd of horses, five Australian shepherds, a Queensland heeler, nine ducks and cats of every shape and color often show up in her stories!
http://dlindunauthor.blogspot.com/
http://www.facebook.com/DLindunAuthor
http://www.amazon.com/DAnn-Lindun/e/B008DKL9TU
Posted by Melissa Kendall at 17:00