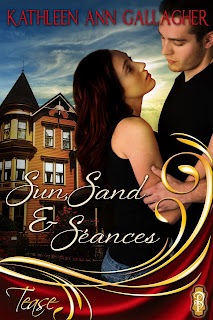 Bobbi Collins is a caring and devoted kindergarten teacher who had her world turned upside down when her fiancé died after a lover’s quarrel. Five years later, she still struggles with acceptance. Her role as an educator fills up her week, but on weekends, Bobbi longs for something more.

When she stumbles across a newspaper ad for a psychic fair in the historic town of Cape May, New Jersey, it seems like the answer. Bobbi is determined to revive her once vibrant spirit.
Kevin Carlton a successful realtor is tired of the dating game. He doesn’t remember buying a raffle ticket, but when his co-worker announces he holds the winning number, he decides to take a chance and attend the all expense paid weekend in Cape May, at the Lady of the Sea's Psychic Fair. Since he was a lazy and unfocused teen, with no direction, he hopes to find a spiritualist who has the ability to contact his late father. Kevin’s deepest regret is being a failure in his dad’s eyes.

Sparks fly when Bobbi and Kevin run into one another at the fair. When strange happenings occur, Bobbi rushes into her ex-boyfriends arms. She never imagined having a weekend of magic, memories, and a chance to rekindle the flame with her lost love.

Will two people who once shared something wonderful, be able to reconnect after dealing with the sudden tragedies in their lives or will it be too late?  Bobbi fears someone or something wants to keep them apart.

Can the historic town of Cape May cast a spell on their hearts and allow the reunited couple to find what they both desire?  How will passion survive amongst the backdrop of a town where spirits never sleep?

Kevin sat and slid close to her. “Don’t be scared. Old hotels need constant repair. Try not to let all of the ghost stories get to you. It’s all in fun.”
“The stories I’ve heard sound real.”
“I think the air conditioner made the noise.” He laughed.
Bobbi grabbed the blanket from the edge of the bed and placed it around her shoulders. “Don’t you feel the cold air?”
“Did you turn it on when you came into the room?”
“No, I thought you did.”
“Now, that’s weird. I didn’t touch it.” Kevin slowly put his arm around her shoulder. With their bodies close, neither of them said another word.
The warmth of his touch calmed her nerves, and Bobbi turned to gaze into his eyes. She gasped when Kevin gave her an intense stare, and gently placed his hand on the side of her face. Her desire surfaced and the wall she’d built began to loosen. As Kevin pulled her close and nuzzled her neck, she placed her arms around his broad back. Then, when he placed his lips on hers and searched her mouth with his tongue, she whimpered and surrendered to his passionate embrace.

Kathleen is offering a handmade-jeweled bookmark, to capture some of the charm of the historic town of Cape May, to one of you. Make a comment to be entered in the giveaway. Don’t forget to leave your email address.

You can find Kathleen here.

Posted by Melissa Kendall at 17:00