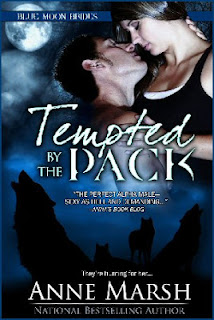 Description:
Once in a blue moon…
For Rafer Breaux, life in the Louisiana Bayou is harsh, violent—and deeply sensual. The Cajun werewolf lives for his Pack and he’ll do whatever it takes to keep his brothers safe. The longer a wolf lives without a mate, the harder it becomes for that wolf to shift back. To remember that he is a man—and not a monster. And those mates can only be found during a blue moon. When a blue moon finally rises, Rafer will need every weapon in his sensual arsenal to tempt one special woman into his arms and the heart of the Pack.

The Pack hunts for mates
Fighting to keep her family farm, Lark Andrews isn’t looking for love. Even if the very sexy Breaux brothers make her dream of hot bayou nights spent in their arms. When the blue moon leads Rafer to her door, however, Rafer has her rethinking her position on all work and no play. Now, the bayou nights are heating up as Rafer fights to convince her, one sensual touch at a time, to give love and passion a chance. But Rafer isn’t a one wolf deal. Is there room in Lark’s heart—and bed—for Rafer and his Pack?

Warning: This title is intended for readers over the age of 18 as it contains explicit sex scenes and/or situations (including multiple partners) and adult language, and may be considered offensive to some readers.

Excerpt:
“Caught you,” he growled in her ear.

“Let you,” she growled right back.

Rafer turned her around to face his unmated Pack members and asked her the question they all wanted to know the answer to. “Who do you choose? Pick one.”

Lark leaned back, savoring the masculine heat pressed up against her. She hadn’t had a lover in years, so maybe this feverish need was her subconscious’s desperate S.O.S.  Because, God, the Breaux brothers were hot. The reality was so much better than the rumors she'd heard. These men focused on her looked hungry.

And Rafer Breaux had his hands on her. Finally.

“You got fantasies, chère.” Rafer’s words were no question.

She let her head hit his shoulder, looking up at him. “Guess you weren’t kidding.”

“I warned you. We need you,” he said, his voice low and harsh as he bent his head to her ear again. Like a lover whispering compliments, except she couldn’t imagine him doing the pretty. He was too straightforward. Too blunt. She liked that. Rafer Breaux wouldn’t lie to her.

His thumb stroked over the pulse in her wrist, and she wrapped her free hand around his. When she tugged, he didn’t let go.

Around them, the other men moved closer. Watching. “This feels good.” Rafer sounded confident. Certain. Suddenly, putting herself in his hands seemed like an excellent idea. “You wan’ to try us all?” He made the suggestion like he was holding her plate at a buffet, waiting for her to point and choose. “You can. No worries.”

She shook her head. There were some places she wasn’t going tonight, no matter how strange the bayou bred them. “I don’t know your brothers,” she protested.

Amusement colored his words. “You want introductions? You and I, we know each other.” He made that brief acquaintance of theirs sound intimate. He gestured one of the other men forward. “This here is Dag. The twins, Dre and Landry. And over there are Luc and Jackson. These are my famille.”

Dag wasn’t as tough and mean-looking as the man currently pinning her wrists to her side—and she hadn’t overlooked how he held her in place and showed no signs of letting go—but he was still plenty rough around the edges. His short, dark hair was cropped close to his head, drawing her attention to his bronzed skin and the hard lines of his face. He was no playful, laughing lover—and yet the hungry look in his eyes tugged at her.

“Don’ you want to play with us?” Dag pulled her hand away from Rafer, pressing his mouth against her palm. His tongue tasted her, and she felt an answering spasm deep in her womb. His eyes flared as if he knew about that secret arousal. “Lark Andrews.” He crooned her name like it was a secret code he’d just unraveled. Part of her knew she should have been concerned. She hadn’t given him her name, and yet he knew her.

“But you could.” Rafer eyed her steadily. “If you wanted to. There’s nothin’ wrong with a little touchin’. A little pleasure. And we could give you a lot of pleasure, chère. Bring those fantasies of yours to life.”

She stared down at the male forearm holding her so close, impossibly tempted.

There was no misunderstanding the sensual hunger on his face, filling his eyes—or the answering chord that hunger plucked deep inside her. She’d been so very, very lonely. Yes, she decided, relaxing her body against the man who held her. Rafer. He smelled delicious, so for one long moment she stretched against him.

He was hard and erect, but when she moved, he froze. As if he was afraid he’d frighten her, when all she wanted to do was reach around and wrap her fingers around him. Explore every delicious inch of him.

Rafer was a fantasy man, and damned if she didn’t deserve a taste of something sweet. It was night, she was lonely and out here in the dark of the Louisiana headlands, the bayou’s black magic surged and pulled at her. There had to be a reason—other than the blue moon—why she wanted a wolf pack and one hell of a sexual game, but right now all she wanted was sex with Rafer Breaux. Her desire was a secret, pounding heartbeat between her legs.

“Yes,” she said. The erection tucked against her ass surged, grew longer. She wriggled, testing to see what he would do. What he would let her do.

Anything, apparently, because the hands on her hips tilted her, positioned her for the hard, sure stroke parting her ass through the worn denim of her jeans.

An alligator hit the water with a gunshot-sharp splash off the starboard side, and she squirmed on his lap.

His cock pressed back at her behind the sun-faded cargo pants.

Wanted the man holding her to lower her to his bed, take her hard and fast. Or slow. She’d never been so aware of her own arousal. Of the heated fantasies in her head. Rafer was solid and large, the feel of him feeding the need building inside her.

Review:
I wasn't sure what to expect from this book but i was pleasantly surprised. Anne Marsh has a concise/straight to the point writing style which really sucked me in. And i definitely found myself wanting more at the end.

Overall i give this 4 out of 5 a sexy must read if you don't mind a little bed hopping. 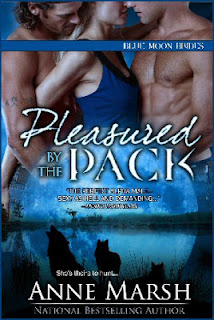 Description:
Dre and Landry Breaux do everything together. Fishing, fighting—and loving. A whole lot of loving. When the blue moon leads these Cajun werewolves to their fated mate, however, they’re ready to reform. Now, they’ll fight to keep the woman of their dreams safe from the evils lurking in the Louisiana bayou—and to tempt her into taking a chance on two of the bayou’s sexiest bad boys.

Mary Jane Johnson is no heartbreaker. Running from a troubled past, the bayou captain wants only to be left alone. When she takes a pair of bayou bad boys on board, however, Dre and Landry have her rethinking her need for space. These two big males have promised to take orders—all of her orders. Suddenly, she’s dreaming of getting as close as possible… to both of the Breaux brothers.

Warning: This title is intended for readers over the age of 18 as it contains explicit sex scenes and/or situations (including multiple partners) and adult language, and may be considered offensive to some readers.

About the Author:
Heated romance. Hot heroes. Happily ever after. Writing as Anne Marsh, I am known for deliciously sensual romance. My nationally best-selling shapeshifter romance, THE HUNT (Dorchester, October 2009) was a double finalist in Borders/RomCon’s 2010 Readers Crown contest. Dorchester released BOND WITH ME, a fallen angel romance set in Moscow in the near-future, digitally in September 2010 and in trade paperback in July 2011. BOND WITH ME was also a finalist in the 2011 Readers Crown contest. Kensington Brava released the follow-up book, HIS DARK BOND, in April 2012 and the book made bestseller lists at Barnes and Noble.

I live in Northern California with my husband, two kids and four cats. After ten years of graduate school and too many degrees, I escaped to become a technical writer. When not planted firmly in front of the laptop translating Engineer into English, I enjoy gardening, running (even if it’s just to the 7-11 for slurpees), and reading books curled up with my kids. The best part of writing romance, however, is finally being able to answer the question: “So… what do you do with a PhD in Slavic Languages and Literatures?” You can visit me online at www.anne-marsh.com.