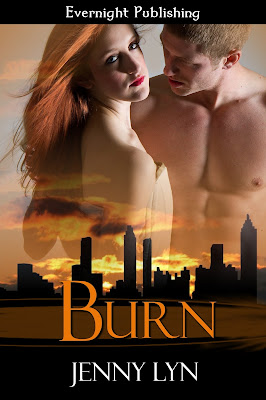 Blurb:
Eight years ago, life was good for Tate Reilly. Living in Atlanta and attending college, her dream of becoming a doctor was within reach, and she was in love with Ryan Hart. Then one night while Tate slept, Ryan disappeared. No note, no phone call, nothing left of a love she thought would last forever. Confused and heartbroken, she doesn’t let it hold her back in her quest to become a physician. If anything, the hurt and disappointment only serve to fuel her drive to succeed.

Ryan never wanted to leave Tate behind the way he did, but sometimes life takes away the choice. The best way to spare Tate the disruption of her bright future with his problems is to make a clean break. So he does the hardest thing he’s ever done—he walks away from her.

Now Ryan is back in Atlanta, working as a sous chef in the most popular restaurant in the city, and he has every intention of winning Tate back, no matter what it takes. It’s not easy because Tate wants answers that Ryan’s not ready to give just yet. First, he needs to remind her of what they once had together. The heat between them is undeniable, and it’s not long before it melts her resistance and she starts to lose the grip on her heart again.

But until Ryan can come clean with Tate about why he left, she can’t fully forgive him and move on. Time doesn’t always heal all wounds. Sometimes you have to shed more blood to become whole again.

A small part of Tate wanted to kill Ryan for tricking her, just reach out and wrap her hands around his throat and squeeze the life right out of him.
But the larger part of her, which unfortunately included the lady parts, wanted to touch him for other reasons, reasons that she suspected dictated her actions when she’d asked for his address rather than telling him to go back to the ER to be checked out. Besides, if he had truly been concerned about his arm possibly being infected, he wouldn’t have asked if she was working, he would’ve just gone to the hospital. Ryan valued his limbs too much to risk losing them to something like cellulitis or sepsis.
So that made her almost as culpable as he was.
She couldn’t concentrate while staring at him without a shirt on. His chest was too appealing and distracting. All bulgy solid muscle over thick bone, smooth tan skin, his areolas small and dark in … Holy crap, one of his nipples is pierced!
Before Tate could stop herself, she’d reached for it as if it was some sort of intriguing abnormality. She had seen piercings on patients naturally, but never one she wanted to touch as badly as she did his.
She didn’t even look up at his face for permission. When her fingers made contact with the small silver hoop, he flinched but didn’t move to stop her. She shifted closer then, running the tip of her finger around his nipple to watch it tighten, before she gave the ring a little indulgent tug.
Ryan hissed through his teeth, and his hands shot out to capture her hips, pulling her flush to his body. The more she toyed with the jewelry, the stiffer his cock grew against her stomach and the harder his fingertips dug into her jean-covered skin. And she had to admit, she liked that she could cause that reaction in him with such a simple touch. Feeling it made her wonder about something else, though.
“You didn’t pierce your…” Tate licked her lips, inexplicably shy with her words all of a sudden. Her eyes jumped up to his.
“My cock?” He grinned. “No. I’m not that brave.”
“Or crazy. I’ve seen horror stories, trust me on that.”
“I can imagine. This was a drunken impulse four years ago.”
She continued to finger the jewelry. “If you take it out, the hole will grow up.”
“I started to, but then … I kind of got used to it.”
Tate gave it another tug, causing him to make a soft grunting noise in his throat. “And there’s a direct correlation between the nerves in the nipple and the nerves in the genitals.”
Ryan laughed, pressing his erection against her stomach. “No kidding, Doc. I’m rock hard. ‘Course a lot of that has to do with the company.”
Tate had opened this door by touching him so intimately, and she was about to step through it. There was no denying she wanted him. Giving in to that desire might not be the smartest thing she’d ever done, but this was Ryan. They had a history, even though the last chapter was depressing. There was no question sex with him would be amazing. She’d worry about the ramifications later. For once, she wanted to act rash and bold and selfish.