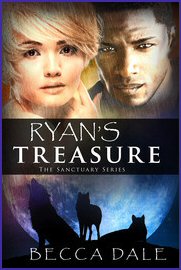 Description:
Nadi has no family and no home beyond the puppy mills where she has lived since birth. Freedom calls to her until she cannot resist risking everything for a chance to run. But being free comes with dangers she’s ill-equipped to handle and a guardian who promises to protect her even as his size and brute strength terrify her.

Ryan Jones spends his life rescuing abused women by day and tortured animals by night. Nothing stops him from watching over those smaller or weaker until a half-starved she-wolf leaps between him and the barrel of a gun. In a night of passion with the gorgeous shifter, everything changes. Suddenly, by pack law, he faces an unexpected role that may destroy his image and their future.

Can love enable Ryan’s treasure to come home to his arms?

Warning: This title is intended for readers over the age of 18 as it contains adult sexual situations and/or adult language, and may be considered offensive to some readers.

Ryan shifted and rose to his full height. Nadi was tall; still, she reached no higher than his shoulder, fine boned and delicate. How could anyone hurt such an exquisite female? Willing his hand not to tremble, he traced the worst of her bruises, faded to nothing more than a faint discoloration over her ribs. “You look better.”

She looked over her shoulder, her startling eyes questioning. “Thank you.” The silence lengthened, but he didn’t attempt to fill it. “Why?”

“I have no idea why anyone would harm another being, especially one as breathtaking as you.”

“Thank you, again, but I wasn’t fishing for compliments.” When she glanced away, a blush tinted her cheekbones, making him long to paint a flush in other places. She turned toward him, her small breasts tight and high in the cool night.

His cock thickened. “Why would you risk your life to free the animals at the mill? Why give up your time and your bed to help a stranger?”

“Because it must be done.”

“Oh.” Her full bottom lip quivered, and she bit down on it. Then, before he could warn her of how cold the water would be, she ran into the river with a squeal, her laugh forced this time.

Had she lost her mind? He dove in after her, sweeping her against his chest so the current would not carry her downstream. “What’s wrong?”

Pushing her wet curls back, she blinked droplets from her lashes. “The water’s cold.”

“Obviously, but that’s not what upset you.” He struggled to keep the scowl from his face. He seemed to intimidate her enough without looking angry. “What’d I say?”

He shook her gently. “Never.”

Her hands found his shoulders and clung to him. “You said it had to be done. I won’t be anyone’s chore.”

“I was talking about the animals.” He dropped a kiss against the soft, smooth skin of her forehead. “You’re different.”

He didn’t expand, and she didn’t ask, merely stared at him while she processed his words. Then a burden seemed to lift away. Her eyes sparkled. She trembled, and a shaky smile tilted her mouth. “I didn’t expect the water to be freezing.”

If he lifted her a few inches, their bodies would align, and he could claim her.

His inner beast snarled. Take her, mark her so no other can stake a claim.

He slid his arm beneath her backside, boosting her higher before he could stop himself. His cock found a place between her thighs, not entering, simply teasing her heated slit. Desperate, he fought his wolf, forcing his animal to back off, but he could not bring himself to step away.

“You’re not recovered enough for...this. You’ll get sick.” Desire roughened his voice almost to a growl.

Long, slender arms circled his neck. “I like it. You’re so warm in contrast to the river. I feel like you’re rescuing me again. I’m torn between loving it and needing to stand on my own.”

“You can lean on me whenever you like. I owe you my life.”

“So, you helped me because of some misplaced sense of gratitude?”

Damn the woman and her need to twist his words. He threaded a hand through her short curls and gently tugged her head back so he could see her eyes. “I appreciate what you did, but I want you near me.” He bumped his hips against hers, raking the head of his cock over her clit and back. “Simple as that, Nadi.”

goal to test and explore reader' fantasies through characters that could be the girl next door or the woman in the mirror, or even the wolf shifter held captive at the puppy mill down the road.


a Rafflecopter giveaway
Posted by Melissa Kendall at 16:16