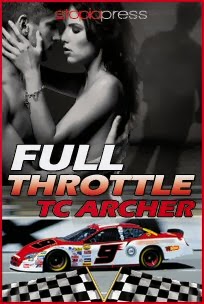 Rex intends to own and drive his own car, but that will cost him millions up front. Last season was a disaster, thanks to a nasty break up, but it taught him a lesson and helped sharpen his focus on what he needed to do: Win every race. And stay away from pretty girls. The last thing he needed was to learn that his new head mechanic, Jimmy James, was the gorgeous redhead pin-up walking around his pit like it was some kind of dance floor.

Gail "Jimmy" James is the first female NASCAR mechanic. As if competing in a man's world isn't tough enough, her bombshell figure bellies her genius IQ, and the pit is no place for either. Nothing Jimmy knew about Rex Henderson the driver prepared her for Rex Henderson the man. But Jimmy has no time to dwell on her feelings as strange mechanical problems curse Rex's car. Whether sabotage or her own mistakes, Jimmy must stay one step ahead of trouble if she's going to keep her job, and keep her driver alive...

Excerpt:
“What the hell happened?” Rex demanded, yanking off his helmet.
“The car is new and you were pushing it hard,” Duff said.
Rex tossed his helmet through the driver’s window. “Something broke out there. I want to know what it was—and why.” Even as Rex said the words, he knew his mind had been on Gail more than it should have been. Had he screwed up?
“We’ll figure it out. First, let’s concentrate on getting the backup ready. We may still get some laps in by the end of day.”
They crossed the pit to the half wall in front of the access road where the crew waited solemnly—minus Gail.
“Where is she?” Rex demanded.
Duff looked around. No one spoke or moved. No shrugs. Not even a blink. Was she angry enough over last night to quit the team? Maybe that plus the locker room incident had been too much.
Brent cracked a grin. “I think she went to the can.”
“The can?” Rex repeated.
“Yeah,” Brent said. “She said she’d wait for you there.”
Rex whipped his glare onto Brent. The idiot was begging for a broken nose. Rex took a step toward him.
Brent backed up, hands at chest level. “Don’t shoot the messenger.”
Rex forced his anger down. One crisis at a time. He vaulted over pit wall and dashed toward the garage. Behind him, Benny, the jackman, said, “Sorry Duff. We didn’t expect to be on the track for another hour. If we had known, we would have let Jimmy—”
Rex trotted around the stalls to the back, where Duff had set up a port-a-potty for Gail. What could she be doing in that thing for—a muffled cry was followed by a dull pounding. Rex broke into a run. He rounded the corner and saw a screwdriver bridging the eyelets on the door and doorjamb of the port-a-potty. Holy cow! How long had she been locked in there? At least a good twenty minutes, he realized, and picked up speed. An instant later, he reached the port-a-potty.
Gail pounded again and screamed, “Let me out!”
Rex winced. Opening the door would be like cutting into a hornet’s nest. He should make whoever locked her in let her out.
He gripped the door handle and said softly, “Gail.”
She went quiet.
“I want you to know I had nothing to do with this.”
“And I’m the Queen of England. Let me out of here!”
She kicked the door twice. The plastic bellowed with each blow. Rex blew out a breath. How had the flimsy plastic contained her for twenty minutes? He gripped the handle of the screwdriver. Sucking in a deep breath, he yanked the screwdriver from the catch and jumped back.
The door sprang open. Gail leaped from the port-a-potty. She shoved at his chest. “You conceited jerk! You think that’s funny?”
A man couldn’t help but smile a little. “Gail, I didn’t—”
She snatched the screwdriver from him and pointed it at his chest. “It’s Jimmy. Get it right.”
Rex sidestepped a swipe of the screwdriver.
“First the locker room, now this!” She stomped closer. He fell back a pace. “Let’s not forget last night at dinner!” She made another jab with the screwdriver.
“Gail—” He saw her fingers ball into a fist.
“Jimmy!” She punched his stomach.
Rex flinched, then sucked breath. He’d been ready for the punch, but she’d gotten him smack dab in the solar plexus. A feminine chuckle sounded behind him. He whipped to the side.
Laura Banks, blonde bombshell NASCAR reporter, smiled. “What’s going on, Rex?” She glanced at Gail, then leveled a brown-eyed stare at him.
“Nothing.” Rex shot Gail another glare.
“Aren’t you going to introduce me to your new mechanic?”
Helluva time for Laura to show up. Sweat glistened off Gail’s forehead where her hair was plastered to her forehead, and she still pointed the screwdriver at him as if he were a screw that needed screwing.
“Not now, Laura.” Rex eyed the screwdriver and grabbed Gail’s elbow. “We have work to do.” He started toward the garage.
Gail yanked free, but didn’t lower the screwdriver. “Afraid I’ll steal your thunder?”
He halted. “My car—”
Her brows shot up in a condescending question.
Rex shrugged. “Laura, this is Gail James, No. 14’s head mechanic.”
Gail shot him a smoldering glower.
He glanced at the screwdriver. “You might want to call her Jimmy, otherwise, she’s liable to screw you to death.”
Gail’s eyes widened, and he gave her a let’s play harder look as he said, “Me, I like living on the edge. Gail, Laura Banks, official field reporter for NASCAR.”
For an instant, Rex thought Gail might take another swipe at him, but she dropped her hand to her side and nodded to Laura. Rex had a sneaking suspicion he would see that tool again, and not in a way he preferred.
Laura stepped past Rex. “Jimmy, you know you’re creating quite a stir.” She cast a glance back at Rex and he knew Laura wasn’t just talking about the media. Damn reporters.
The women started toward the garage.
“Gail,” Rex called.
Her head jerked to the side and her narrowed eyes met his.
“When you finish with Laura, you might want to pitch in with the car. I crashed it.”
Her mouth dropped open.
“My producers are screaming for an exclusive,” Laura said, but Rex didn’t think Gail heard. Her gaze remained transfixed on him. He almost felt sorry for her.
“Can we go somewhere and talk? I want to know everything,” Laura said. Gail slowed and Laura said, “Ms. James?”
Rex caught the anxiety in Gail’s eyes before they turned the corner. A second later, Duff appeared around the garage headed in Rex’s direction.
Duff halted beside him. “Locked in the port-a-potty?”
Rex nodded, his attention on the spot where Gail had disappeared.
“Was she mad?”
Rex turned his attention to Duff. “Mad doesn’t do it justice.”

About the Author:
T. C. Archer is comprised of award winning authors Evan Trevane and Shawn M. Casey. They live in the Northeast. Evan has a Ph.D. in electrical engineering, and Shawn is a small business owner. Their collaboration began on a lark with the post WWII film noir story The Pickle My Little Friend, and has evolved into over a dozen works, which includes their new series The Phenom League, and Daphne Du Maurier winner the romantic thriller For His Eyes Only.

a Rafflecopter giveaway
Posted by Melissa Kendall at 21:11